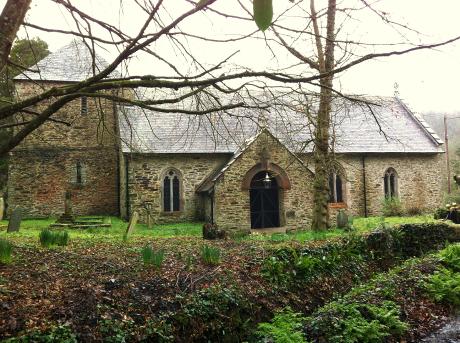 Our normal service times are:-

PLEASE NOTE:- There is no service where there is a fifth Sunday in the month.

This is usually held at 11.00 am at either one of our churches in our Team Ministry.…..All Saints’   Millbrook: St James’ Torpoint: St Philip Maryfield: St Mary & St Julian Maker: St Germanus Rame and St Andrew’s Cawsand.

Our Church Wardens are:

Our Priest in Charge is:

St. John belonged to the Abbey of Tavistock and was leased by the Dawney family in the thirteenth century. The Church still retains its Norman plan of a chancel, nave and low west tower. The tower is twelfth century but may have been rebuilt in the fourteenth century. You can see the blocked west doorway in the tower as you walk up the path. The nave has early fourteenth century work. The church, except for the tower, was rebuilt again in 1867 by the busy London architect. Mr William White, who also worked in the nearby churches at Torpoint and Maryfield. The south porch was probably rebuilt in 1605: note the datestone set low in the wall. The date on the porch of 1605, must however, be viewed with caution. It will be noticed that the date at the gate to the new Churchyard, just opposite the entrance to the Church, is 1905, appears to be worked by the same mason. It is suggested that he mistakenly at first carved ‘6’ for ‘9’ and then inserted the incorrectly carved stone in the porch!

Above the porch can be seen the eighteenth-century slate sundial. The double doors into the church have fine nineteenth century strap hinges and above can be seen the blocked tympanum (the space between the lintel and the arch over it).

The Nave and Chancel, with perhaps the exception of the north wall, appear to have been rebuilt in the early part of 14th century. There is a brief reference to this in the Churchwardens’ accounts in 1749.

The Font is located straight in front of the entrance by the north wall.  It has been tentatively dated to the 15th century. It is octagonal; the bowl is of Pentewan stone, and rests on a Bath stone shaft.

The simple nave and chancel with West Bell tower occur in a number of churches erected under the influence of the Norman manorial Lords and our Church at St. John may owe its shape to this. The nave and chancel appear to have been rebuilt several times possibly starting about 1150 when the Abbot leased the three churches to the Dean of Petherwin. The Churchwardens’ Accounts of 1749/50 indicate the taking down and rebuilding of the nave and chancel and there was further restoration carried out in 1868.

The sanctuary chair in the chancel is dated 1635.

There are some very fine nineteenth century brass candelabra oil lamps in the nave. They came from the old Chapel at Cremyll when it stopped being used about 60 years ago.

Both the north and south windows in the chancel are fourteenth century with late nineteenth / early twentieth century stained glass. The north window of the nave has fragments of medieval glass reset in roundels and diamonds of an older window shattered by a blast from a Land Mine during the 1939/45 Second World War. 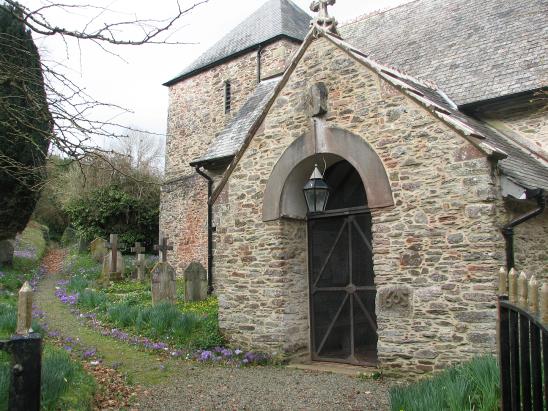 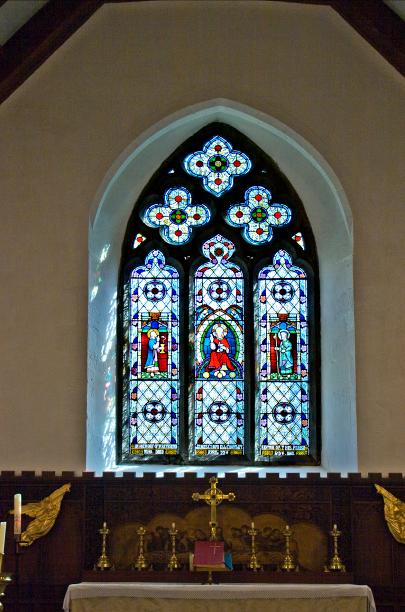 In 1743 the then rector of St John, Ambrose Hodge, tells us he had just 15 families living in the parish, 63 souls. He held four communions a year for 16 communicants. There were no dissenters and no school. The Trevil charity left one shilling a week to be distributed in bread for the poor of the parish every Sunday forever. The money for this charity came from the manor of Botelet in Lanreath, owned jointly by Trelawny and Trevil Cross. Mr. Trelawny had constantly paid his part but Mr. Cross was about 12 years in arrears. The rector lived at Plymouth Dock at the time as the parsonage house has not quite finished. In 1773, the Rev. Mydhope WaIIis was serving this parish whilst living at his small family estate of Trethill in Sheviock. He tells us that the parsonage house of St. John lies in the parish of Antony, 100 yards from the church. Another six families had moved into the parish by this time.

The next rector was the Rev. Wallis’s son-in-law, Bryan Roberts. By 1808 a room in the parish was being used by the Wesleyan Society.

The early parsonage house at St. John seems to have had a gatehouse leading into a courtyard in front of the house. This gatehouse, which was thatched, had a dairy on one side of the passage and a cellar (at ground level) on the other. The main house had a hall, to which belonged a table and a chair as part of the fittings, a parlour and two other ground floor rooms with chambers above. Part was thatched, and part slate and all the ground floor rooms had earthen floors. The farm buildings were all thatched as was the bakehouse There were three small cob/stone cottages attached to the living. One on the east side of the churchyard, one on the west and the third above the water conduit (the leat that still runs through the village today). All three cottages had earth floors and thatched roofs, and each had a small garden attached.

By 1728 the parsonage house had been much improved. It still had its thatched gatehouse, 32-foot x 16-foot x 14-foot-high, and thatched bake house and farm buildings, but the house itself was said to be built partly of stone and partly of brick with a state roof. It was 77-foot-long with a two-roomed entry and four ground floor rooms, plus a linney (an open-fronted shed). Above were five chambers plus a study. The study and two of the chambers were plastered.  The cottages seem to have gone by this date; there is mention of a waste plot by the churchyard towards St. John’s bridge where one may have stood.

The attached document recently came to light. It makes very interesting reading. It is an inventory of St John Church in 1905, lists of the incumbents over the years and some history. 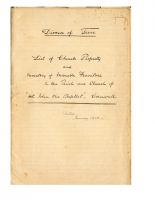